This is an exercise of understanding and using our brains. The human brain is an endless network of synapses and neurons, linking memories and knowledge that we didn’t even have to learn the hard way. And yet…

Every so often it behooves a member of our species to learn something the hard way. In Florida, this may or may not involve alligators.

The American alligator (Alligator missipiensis) is an international conservation success story. They were hunted to the brink of extinction until listed on the Endangered Species Act in 1973. By 1987, the population had rebounded to a point that they are no longer a listed species. It is currently estimated that there are around 1.3 million alligators in Florida alone. They are found in every county, usually in dark murky ponds and cypress swamps.

Now we turn our attention to the brain:

The average healthy human brain weighs around 3 pounds. We have one of the biggest brain to body size ratios in the animal kingdom, only dolphins have larger. Outside of our network of memories and cognitive abilities, we have a very powerful vision center. This tells us that our brain is good at processing visual information. Like most primates, our eyes are great at picking up colors using a combination of red, green, and blue sensing cones in our retinas. Our other senses are not nearly as well developed in terms of survival, but our language and communication centers compensate for this and have allowed us to take over every continent on Earth.

The average male American alligator grows to be approximately 11 feet in length and almost 800 pounds. The females usually grow to be around 8.5 feet and 200 pounds. A very large alligator can get to be almost 14 feet long and weigh nearly half a ton. Their brains usually weigh between 8 or 9 grams… The shape of their brain suggests that their olfactory centers, which control chemical sensors and the sense of smell, is on overdrive.

Are we sensing a pattern?

They are instinctively reactive.

I caution you to misplace this reactivity with stupidity though. Alligators ain’t stupid. Their species has been around for millions of years. They are quite capable of learning and storing information. Alligators in captivity are frequently target trained to limit aggression during feeding. They can also develop very strong associations, whether positive or negative, based on previous experience. Damn you, Pavlov…

So, what does all this information mean for us, the people who live with alligators?

For one thing, it means that we can’t blame alligators for our conflicts and issues. They are doing what they have been since Florida existed. Secondly, we need to use our brains. Some people, average people, tend not to and get into bad situations. Lastly, we need to want to learn the ways to live with alligators more effectively.

If you have decided to follow all three of the first tips, then you are ready to hear the rules:

1. DO NOT FEED ALLIGATORS a. It is completely illegal. You are breaking the law if you are feeding an alligator. You may think that is a loose guideline and no one would catch you. They won’t have to if the alligator does first. Food response is a very simple mechanism in the alligator brain. Once it is classically conditioned to associate humans with food, it becomes a problem gator. b. Another thing to remember: Alligators may snap up anything, but they are carnivores. They aren’t supposed to eat bread, marshmallows, or Cheetos. I don’t care if Grandpa or Grandma says it’s okay, it’s not.

2. MONITOR YOUR PETS a. Better yet, train your dog! An alligator can be anywhere around that has deep, dark water. Dogs, cats, and other furry little pets look just like the animals that they are supposed to be eating in the wild. If you have a well-trained dog, then you limit your problems. b. The worst part is, the alligator’s camouflage works on animals like dogs. They won’t notice the gator sitting at the water’s edge waiting to ambush them. It’s up to you to be alert and in control so that Fluffy stays safe and sound.

3. LEARN TO PROPERLY IDENTIFY A NUISANCE a. For example, people feeding the alligator… b. Joking aside, not all gators are nuisance alligators. The Florida Fish and Wildlife Conservation Commision (FWC) defines a nuisance gator as one that poses a threat to people, pets, and property. If it is under four feet, it isn’t really a danger to anyone unless handled. Just because it’s big and intimidating, doesn’t mean it’s bad. c. If an alligator intentionally or aggressively approaches, it means one of two things: It is a nuisance alligator, or a mother alligator ferociously protecting her nest or hatchlings. Alligator moms will protect their young for up to two years. If you notice a nest mound near the bank of the pond, I suggest leaving that area alone. Don’t let kids and pets play around that active nest.

4. LEAVE THE HANDLING TO THE PROFESSIONALS a. There are too many videos on YouTube for this not to be mentioned. b. Alligators are potentially dangerous animals. If you feel threatened by the presence of an alligator near your home and you have followed all the rules listed here, don’t take it upon yourself to “take care of the problem”. Even a small alligator can give you a pretty nasty bite. c. By the way: killing, harassing, or possessing an alligator is against state law without the proper permitting. d. The Nuisance Gator Hotline number is 866-392-4286

Walking on the Wild Heart Side

Advocacy for Conservation of Land

Training Your Dog and Walking Your Cat 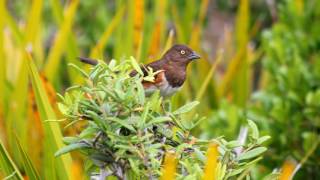 Being a Better Birder

This is what it's all about!

Walking on the Wild Heart Side